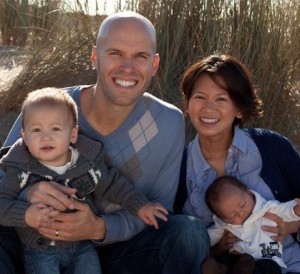 He and his wife Daisy join us from  California, where Steve was a pastor for teens and young adults at The Place, a church in the Southern California Conference. He was raised in Lodi, California and loves to golf, surf, travel, and be bald.  He and Daisy have two boys – Ian and Gavin.

Steve is part of an Adventist ministry family: his father is Pastor Ron Carlson, now president of the Kansas-Nebraska conference. Steve grew up in North Dakota, Missouri, and California. He’s a graduate of Union College in Lincoln, NE. Daisy, also a Union College graduate, is from Kansas City. Prior to The Place Steve ministered at Campion Academy (home of the Campion Cougars!) in Loveland, Colorado.

The Ohio Adventurers is a companion organization to the Ohio Pathfinders. The Adventurer clubs utilize hands-on activities, geared for children ages 4-10, to provide experiences and develop skills that will be beneficial throughout life.Visit their website at http://ohioadventurers.com/